Companies That Donated to BJP Got Tenders For Bullet Train Project 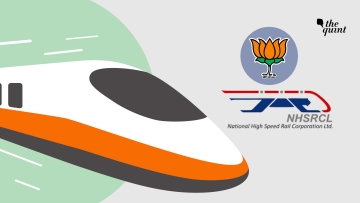 One of the first announcements Uddhav Thackeray made after becoming the chief minister of Maharashtra is that his government would “review” the Mumbai Ahmedabad bullet train project.

This has brought focus to the contracts given under the bullet train project – officially known as Mumbai Ahmedabad High Speed Railway project (MAHSR) – which is an Indo-Japanese joint venture.

The Quint found out that at least three of the tenders under the MAHSR project were given to firms that have donated to the BJP in the past.

For instance, a tender for “Leasing of space for computerised reservation system complex of Western Railways near Vadodara Station” has been given to Gujarat-based company Cube Construction Engineering Limited. It turns out that the company has been an active donor of the BJP.

According to the details of donations released by the BJP, the company has donated a total of Rs 55 lakh to the BJP in three separate transactions: Two in financial year 2012-13 and one in 2017-18.

The company is primarily based out of Vadodara. According to its website, Cube Construction has been awarded a number of government contracts such as the with Gujarat Industrial Development Corporation, Gujarat Forensic Sciences University, Sardar Vallabhbhai Patel National Institute of Technology, the Gujarat Urban Development Corporation, and the Gujarat Education Department.

It has also been given contracts by central bodies like Oil and Natural Gas Corporation, Border Security Force and Indian Space Research Organisation. In its website, Cube Constructions has showcased how its projects were inaugurated by top BJP leaders.

One project was inaugurated by Prime Minister Narendra Modi.

Curiously, one of its projects was inaugurated by BJP president Amit Shah when he wasn’t holding any public office. The project was a Gujarat government one.

There are two other companies which donated to the BJP and got contracts under the Mumbai Ahmedabad High Speed Railway Project.

One is a contractor called KR Savani which has been given the tender for “construction of various service building at Vadodara station in connection with Mumbai Ahmedabad High Speed Railway Project”.

Savani, another a Gujarat-based contractor, donated Rs 2 lakh to the BJP in 2012-13 financial year, according to the records released by the party.

Another such contractor is Dhanji K Patel who was given the tender for “miscellaneous work between Vatva to Sabarmati D-cabin for MAHSR project”.

There is another Gujarat-based company named Rachna Enterprises that has been given the tender for “Proposed electrification of line No. 14, 15 and 16 and OHE modification in Karachiya yard” near Vadodara.

A Gujarat-based company of the same name has donated to the BJP several times. However, it could not be confirmed whether the two companies are the same.

These donations are only from the list that has been declared by the BJP, and not from the total donations received by the party. According to Association for Democratic Reform in 2017-18, 54 percent of BJP’s income was from “unknown” sources. It got over Rs 550 crores from such sources. These are all donations under Rs 20,000 which a party is not obliged to declare as per rules. There is no way of ascertaining if companies which got contracts under the bullet train project are among BJP’s unknown donors.

(The Quint is now available on Telegram. For handpicked stories every day, subscribe to us on Telegram)