Recently, Kartik Aaryan posted a collage of his and Deepika Padukone’s old pictures and asked if any director is interested in making a film with them.

Kartik Aaryan is currently one of the busiest actors in Bollywood. With Luka Chuppi and Pati Patni Aur Woh, the actor had two successful releases in 2019 and is looking forward to as many as three films in 2020– Imtiaz Ali’s yet-to-be-titled film with Sara Ali Khan, Dostana 2 and Bhool Bhulaiyaa 2. Now, he wishes to do a film with Deepika Padukone.

On Thursday, he posted a collage of his and Deepika’s old pictures. Sharing the post on his Instagram story, the actor asked if any director is interested in making a film with them. “Hai kisi director mei dum (sic),” he wrote over the picture. Deepika was quick to take notice of the post.

Re-sharing the post on her Instagram Story, the actress asked, “why these pictures though!?!?” Replying to her, Kartik quoted a dialogue from her debut film Om Shanti Om and wrote, “Kyunki tabse Qainat iss koshish mein lagi hai.” 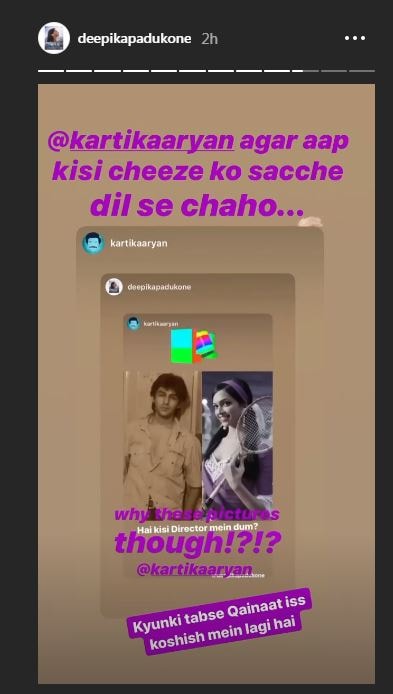 This is not the first time that Deepika and Kartik were in the news. Earlier, Deepika had requested Kartik to teach her the Dheeme Dheeme step from his upcoming release Pati Patni Aur Woh and asked him to show up outside the airport on December 1 at 9 am. Kartik arrived on time and fans got to see a dance collaboration as they took the Dheeme Dheeme challenge outside the Mumbai airport.

Also, recently she asked for a Christmas gift from Kartik Aaryan, who was seemingly in the mood to become Santa Claus and distribute gifts. Kartik posted a picture of him wearing a red colour theme cap and captioned it as “Why fear when Santa is here. Kis kis ko gift chahiye.”